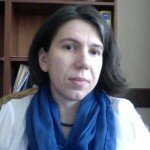 National contact
is a Senior Researcher at the Institute of Sociology (Sociology of Communication and Public Space Laboratory) within the Romanian Academy. She is also an associate researcher with the Media and New Technologies Studies Center, University of Bucharest.
In 2009 she got her PhD. from the University of Bucharest with a thesis on Children Relationship with Television and NTIC. Her main research interests include the sociology of the media, children’ uses of NTIC, children and the media, media violence.

She co-authored two volumes, including Tele-visual Representation of Violence and Child Protection (with Drăgan, I, Ştefănescu, P. and Povară, A., 2009, Vanemonde Publishing, Bucharest). She participated in national and international research projects in this field: (2009-2014), she is a member of the EU Kids Online III Project; (2009-2012); director of the project The Impact of Media Violence on Romanian Children. An Analysis of the Civic, Ethical and Aesthetical Dimensions; (2006-2008), and she is a member of the project “The social and cultural impact of the Internet on Romanian Adolescent and Youth”.

Team member
PhD, is an Associated Researcher at the Institute of Sociology, Romanian Academy and a Postdoctoral fellow at the Institute for Research of Children, Youth and Family, Masaryk University – Brno (Czech Republic).
She has started taking an interest in the topic of children and new media in 2007 and she has been with the EU Kids Online team since 2009 as the national contact for Romania. Within the project, she has focused on online contact risks, digital inclusion and, more recently, on policy dilemmas in approaches to online safety and children’s rights.
Her general research interests are in the area of technology and sociality, sociology of childhood and rights-based policy approaches to children’s use of new media.

team member
PhD, is a Reader at the Faculty of Sociology and Social Work – Bucharest University (Bucharest, Romania). She teaches undergraduate and graduate courses in media and society, and methods of researching mass communication. Her interests lie in gender, media and communication studies in Eastern Europe, particularly in Romania.

team member
is a PhD candidate with the doctoral subject thesis “Digital divide in Romania”, Babes-Bolyai University, Faculty of Sociology and Social Work, Cluj-Napoca, Romania.
She was a visiting PhD student at the Institute for Research of Children, Youth and Family, Faculty of Social Studies, Masaryk University, Brno, Czech Republic (January 2012-May 2012). From September 2011 she has been a  member of the EU Kids Online III Romanian Team and also expert – contributor in EUN Partnership AISBL. Projects in which she was involved: Research specialist – contributor, AOR with cooperation of Babes-Bolyai University (October 2010- February 2011); Research specialist – contributor, Faculty of Sociology and Social work, Babes-Bolyai University (October 2009- February 2010).

Publications: Closing the gap, are we there yet? Reflections on the persistence of second-level digital divide among adolescents in Central and Eastern Europe Barbovschi, M., under review).

The Institute of Sociology (INSOC) of the Romanian Academy is a research institution in the field of social sciences and humanities with an almost half a century track record of research activity, guided by an integrative academic vision.
Benefiting from the activity of numerous sociologists, the Institute has seven research departments/laboratories, such as the Laboratory of Sociology of Communication and Public Space or the Laboratory of Deviance and Social Problems.
The Institute is funded from CRED CA by the public budget and from contracts and publicly auctioned research grants. Over the past 10 years, the Institute has conducted relevant social research through tens of research projects resulting in more than 120 books, 500 articles of national and international impact, and over 400 scientific communications.

We use cookies to ensure that we give you the best experience on our website. If you continue to use this site we will assume that you are happy with it.Ok